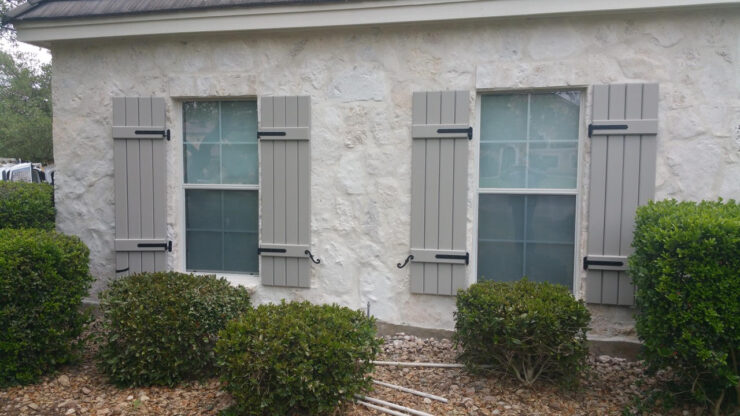 Building and installing functional shutters for storm protection, privacy, or just to enhance the appearance of your home doesn’t have to be an overwhelming project. Plenty of examples of historic shutters were simple home-made affairs that required little in the way of tools and woodworking skills, but those shutters have proven functional for a century or more…. simple works for me.

Internet instructions that I’ve seen give the impression that their approach to the shutters and hardware to hang them has been more complicated than necessary. The following example is based on the most common shutter installation situation. We used the simplest shutter construction coupled with hardware designed to easily install board and batten shutters.

The first thing with this or any other installation is to determine the most appropriate way to locate the shutters relative to the window. Then decide what hardware will work best. Looking at our installation options page, what we have here is a window installed flush with the exterior of the structure and shutters that mount “proud” (outside of) the window frame.

This is a simple approach that is easy to install and particularly attractive when storm/screens have been installed on the face of the window. I chose to show this installation because it doesn’t require shutters made to tight dimensions and it positions the closed shutters to be braced by the building, providing maximum security against storm winds. 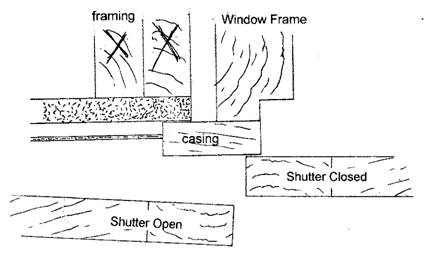 Having decided on the installation approach, selecting the best hardware for the installation is next. Having thoroughly researched the historic as well as the hardware that’s currently available and, finding nothing appropriate, I figured there had to be a better way to hang board & battens – so I made my own hardware. The good news is I made a bunch, so you don’t have to make your own. This example uses our #409 board & batten hinges, very simple to install.

First, we measured the inside width and height of the opening. We’ll use this dimension to figure out the size of the shutters – they’ll want to be a bit wider and higher than the opening.

And the good news is we already know how the shutters will fit the opening and what hinges we’re going to use. Getting the right approach and stuff is the hard part.

Three parts to the hardware:

As noted, we’re using our Brandywine Board & batten hinges and pintles, item #406. These hinges surface mount on the face of the shutters and are contemporary in design. If you want to go with a strap hinge look, you could use #410 – the Philadelphia Strap hinge. If you have larger, heavier shutters you may want to consider any of #700 series strap hinges mated with #304 pintle. All of those hinges install the same way as these. 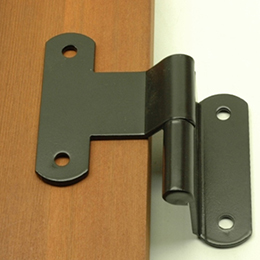 As with all historic shutter hinges, board & batten hardware is made as “lift-off” hinges. The pintle attaches to the building with a vertical pin while the hinge has a female barrel. The male & female parts are of equal heights and meet in the middle.

It is a simple matter to lift the shutters and their attached hinges from the pintle to do maintenance.

Done – yeah, right. Done hanging the shutters, which is only the first of the three hardware elements in shutters. Now the shutters swing from open to closed, but they still don’t lock in the closed position or have anything to hold them open and not just banging in the wind.

First the locking thing…. We used our standard 610 shutter bolt, the most common early pattern.

To keep the shutters open. You can use long hooks or shutter dogs (some call them tiebacks). What’s right? Whatever works with your installation and makes you happy.

Sometimes sill mounts with shutter dogs work – like if you have a random stone exterior. Clapboards almost always require plate mounts to insure you get into sound structural material to secure the dogs and shutters. Long hooks are a great option but they require a pretty substantial sill to anchor them.

I chose tiebacks for this example because they’re most typical and they give you visual options in dressing up your shutters and the exterior of your home. I went with our #805 Belmont because it’s a nice looking form with early historic roots and it’s not the typical “S” shape you can find in a hardware store.

The real critical dimension is how far below the edge of the shutters the dogs are installed. They must be high enough to firmly engage the shutters in the open position, but low enough for the shutter to clear the tieback when it is rotated to the horizontal position to allow the shutter to be swung closed.

Position shutter dog below the shutter in the horizontal position so that the shutter will freely swing past the dog and note the distance from the shutter. 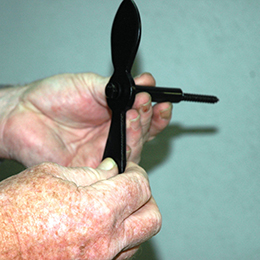 We’ve assembled the Brandywine Forge lag screw installation kit with the shutter dog. The Brandywine lag kit includes our unique polyurethane “stand-off” sleeve. The sleeve covers the lag threads on the back of the dog and presses against the back of the dog and the structure as the lag is screwed in. The stand-off tube is compressible, so you can crank down until the dog is resting against the face of the shutter to eliminate rattle. Each shutter can be installed so it rests against the structure, compensating for differences in the wall to which the shutter is installed. 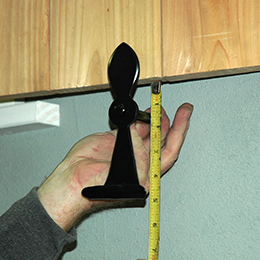 Duplicating the established distance from the shutter – all that remains is to drill a pilot hole and install the lag screw. For brick or masonry, a lag shield would be installed to accept the screw.

If you need more information on how to install a functional board and batten shutter, make sure to watch the following video: